Rethinking What It Means to Help Seniors with Medicare 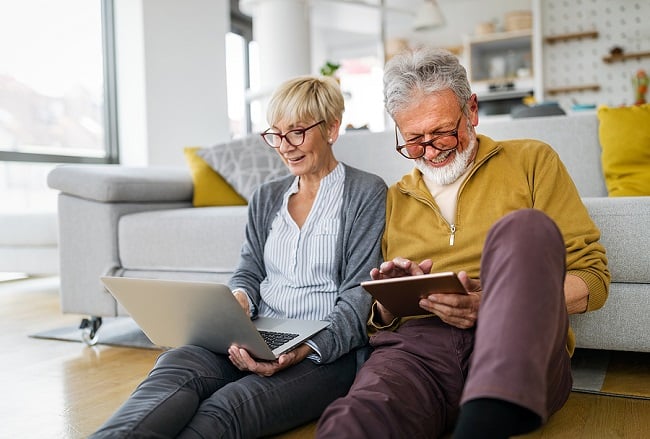 For a long time, the assumption has been that seniors are slow adopters or steer clear of new tech. Despite some individuals who broke the stereotype, that was probably largely true in the past – but is it true anymore?

Approximately 10,000 seniors turn 65 and age into Medicare each day. The United States Census Bureau says that all Baby Boomers will be old enough to qualify for Medicare by 2030. Many of these individuals have been using technology in their jobs for years. Others have mastered technology for personal reasons. Today’s seasoned individuals probably aren’t as low tech as you think.

Many Seniors Use Technology

You might not have noticed it, but seniors have been becoming more technologically savvy for several years now.

Back in 2017, Pew Research Center reported that approximately two-thirds of Americans aged 65 and older use the internet, 42% own smartphones, 32% own tablets and 34% use social media.

Among the 65 to 69 age group, the numbers are even more impressive: 82% use the internet and 59% own a smartphone.

And that was a few years ago. A lot has changed since then …

Seniors are especially vulnerable to COVID-19. When the pandemic hit, seniors were urged to isolate. But this led to immediate problems. How would they buy groceries? How would they get healthcare? How would they stay connected with friends and family? In many cases, the answer lay in technology.

The Guardian called Zoom a “lifesaver” for many seniors trying to stay connected during the pandemic. Seniors used video conferencing to chat with friends and family, but also to take classes and participate in exercise programs.

Seniors also went online to shop. According to Firstpost, data from NPD Group’s Checkout Tracking shows that Americans aged 65 and older spent an average of $187 online per month last year, an increase of 60% compared to the previous year.

Seniors also moved to online for many of their healthcare needs …

Telemedicine Is Gaining a Foothold

In response to the pandemic, Medicare increased coverage for telemedicine services. Many seniors took advantage of this change, and Medicare Advantage enrollees also used the telemedicine benefits offered in their plans.

According to Deloitte, 26% of Medicare Advantage members said they used telehealth or virtual health during the first four months of 2020, compared to only 13% of enrollees who did so in all of 2019. That’s double the percentage in one-third the time.

Seniors may also use technology to help them stay healthy. A 2020 study from CVS Health found that 34% of seniors aged 65 and older are interested in using digital tools to help them stick to their health goals.

Once they feel safe returning to the doctor’s office, some seniors will likely do so. However, other seniors, especially those with transportation or mobility issues, may prefer the convenience of telemedicine. There has been a push to make Medicare’s expansion of telemedicine benefits a permanent feature.

The Medicare Crowd Is Younger than You May Realize

Seniors are going online to shop, socialize and get healthcare. At the same time, a lack of knowledge about Medicare remains a problem. According to Managed Healthcare Executive, a poll found that nearly one-third of seniors enrolled in Medicare say they don’t have enough information about Medicare Advantage options and 57% are not familiar with the Star Ratings used to grade Medicare Advantage plans.

Will You Seize This Opportunity?

Tech-savvy seniors represent an unprecedented senior market opportunity for agents who are prepared to provide digital education and an online purchasing experience.

Here at Western Asset Protection, we train and encourage our agents to be what we call a Hybrid Agent. One who can accommodate the needs of their clients both in person and online. With user-friendly tools like Medicare Enrollment Express and a robust Agent Portal, Medicare Engine, Agents can sell outside the territory they reside in and expand into other counties or states if certified.

Visit Western Asset Protection to learn more about all we offer our agent and agency partners.